It’s not every day you see Karl Marx at the People’s Park – or Rod Stewart on Patrick’s Quay for that matter. As a relatively new Cork implant, I’ve been spotting the likeness of various people of note spray-painted on the city’s electrical boxes. As a street art dilettante, I’ve been posting these colourful curiosities to Instagram (@aocdotme) since I moved to The Real Capital (you see, I’m already fitting in) without any real knowledge of why or how they got there – until now.

As my wise mother used to say, ‘Thank God, you don’t have to steal for a living, Annmarie; you’d starve!’ By golly, I do believe the woman has a point. The hashtag #MadAboutCork on each portrait should have been my first clue. Cue: several months later and I stumble across a twitter account brandishing faces of the O’Donovan brothers (Cork: 2; Not Cork: 1), The Frank and Walters Band and Cillian Murphy, which, not surprisingly, belongs to @MadAboutCork. The penny dropped – at high velocity from a ballistics gun.

It’s safe to say, I should neither resort to petty theft nor should I be called to stand witness at a trial. Powers of observation are not my strong suit. In fact, I’m attributing my single status to not having seen Mr Right on account of believing he’d come out of left field. Geddit? O.K. Perhaps add ‘stand-up comic’ to that list. But I digress… 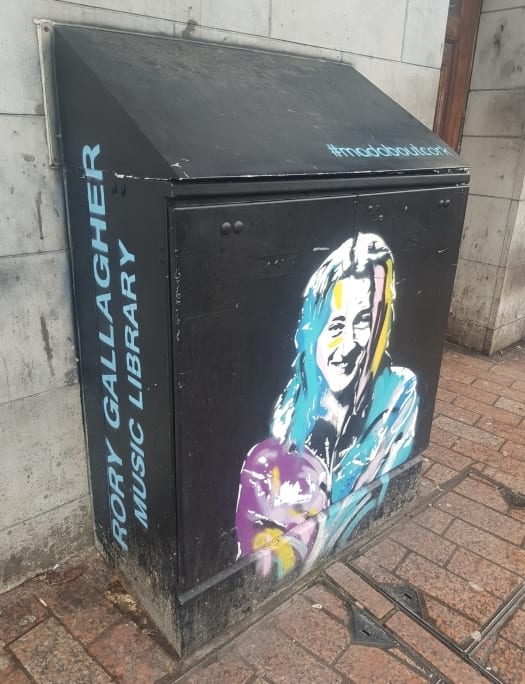 So, what is this Mad About Cork malarkey? Mad About Cork is a city-based guerrilla group making positive changes in derelict and run-down urban spaces through street art and guerrilla gardening. Specifically, their electrical box initiative has used these oft-overlooked blank canvases to add colour and personality to the streets.

Take it from someone who moved in the depths of winter. Put simply, I don’t think Guns & Roses had Cork in mind when writing November Rain. Spotting The Young Offenders and Rory Gallagher on the regular, however, made fighting with my inside out umbrella, less of an ordeal.

Here’s the best bit. Mad About Cork is looking for volunteers and are encouraging folk to spruce up their hood for the annual Spring Clean-Up on Saturday, 6th April. Get involved, donate materials or simply spread the word. I know where I’ll be; provided I find it, of course. Even my GPS has given up on me.

This error message is only visible to WordPress admins

Please go to the Instagram Feed settings page to create a feed.